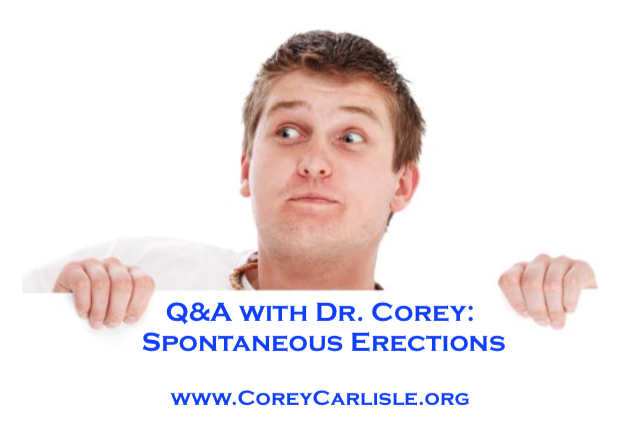 By Dr. Corey CarlisleSeptember 24, 2015No Comments

“I am a 28-year-old guy and I’ve been having a problem with unpredictable erections four to five times a day. I can’t seem to control them and they appear consistently. Whenever I am talking to an attractive woman and not even thinking any sexual thoughts, I get one. Also, the other day my little niece and nephew were playing on my lap and I started to get one. This sort of freaked me out! Am I a pervert? I understand teenage guys get them all the time, but I do not understand why this is still going on. Do you have any advice?”

I certainly hear your struggle with spontaneous erections throughout the day. The penis is a very sensitive part of the male anatomy, responding positively and negatively to many life and relational factors.

While it is true that as we get older erections tend to be less spontaneous and more connected to intentional sexual episodes, some level of erectile spontaneity remains for many guys. These might be “semi” or fully rigid erections, whose strength and duration again depend on many variables. They might be connected to life changes in health, diet and exercise, relationships, work satisfaction, spiritual development, etc.

Here is my take on your situation:

Every few hours men receive a surge of testosterone to keep optimal hormone levels in the body. Your erections might be connected to these surges. In this case, they might be similar to nocturnal erections that simply come and go on their own, without being directly connected to sexual desire. In general, it is helpful to simply acknowledge the arousal to yourself without hyper-focusing on it. Keep your attention focused on the (non-sexual) situation you are in. Trying not to have an erection in these situations can actually increase the likelihood of having one.

The penis can also respond reflexively to direct tactile stimulation, such as children playing on your lap. The erection is a reflex if it is not in response to sexual thoughts. There are cases of men with spinal cord injuries who are still able to have an erection, and even ejaculate, from direct penile stimulation even though they cannot feel the stimulation (i.e., the nerve impulses do not reach the brain). Experiencing this reflex in no way makes you a “pervert.” Consider play that minimizes the stimulation if these erections become a problem.

Spiritually, our sexual energy is a unifying force, driving us to connect with others, God, and all of creation. Sometimes erections are simply reflecting the opening of our heart toward an individual or situation, or merely being in a positive mood (i.e., “happy erections”). It is not uncommon for men to get erections in the presence of Beauty, whether that beauty is in the form of Eve, nature, music, friendship, meaningful work, praise and worship, or the like. At these times, the erection is not necessarily suggesting a desire “for sex” per se, but rather is a physical witness that testifies of a deeper spiritual reality. The swelling of the heart is reflected in the swelling of the penis. In this case, let your erections be a reminder of this deeper reality and your desire to be joined with the good and beautiful of Life. Cultivating your awareness here would also free you from hyper-focusing on the erection itself.